High-quality synthetic graphite has been produced by the EERC’s UCP technology. The graphite material is currently being evaluated for its performance as active material for lithium-ion battery anode and other applications. During this research, potential new graphite structures called “Croissant Graphite” have been discovered primarily in lower rank coals like lignite, subbituminous, and, to a lesser extent, in bituminous coal. Anthracite coal does not produce any croissant structures. These structures were so named because of the structural resemblance of the morphology and texture with croissants. These specific carbon products have use in lithium-ion batteries, nuclear power generation, industrial manufacturing for Aluminum, and lubricants.

Coal-derived graphite made by the UCP process has been used to prepare graphene oxide (GO) by exfoliation following the Modified Hummer’s method. The produced GO was chemically converted to reduced graphene oxide (rGO) by a solution-based approach using a suitable chemical reducing agent. These specific carbon products can be used in anti-corrosion coatings, anti-icing for aircrafts, medical anti-microbial agent, and more.

The EERC is also developing a solution-based process for making GQDs from coal or coal waste resources. These GQDs have potential applications in biomedical sensors, bioimaging, photovoltaics, LEDs, anti-counterfeiting, and optical applications.

UCP technology is an environmentally sustainable process to upgrade and convert all ranks of coal or coal waste feedstocks to high-value carbon products such as graphite, graphene, and graphene quantum dots. A process flow diagram of the UCP process is presented below. This technology is applicable to all coal ranks and their wastes.

The EERC has developed a novel test system for corrosion evaluation of alloys, ceramics, and coatings. The Dynamic Corrosion Test System (DCTS) provides for the analysis of test coupons at elevated temperatures and pressures while simultaneously supplying a specific atmosphere for exposure. This unique system is the only known dynamic system available in North America and can accommodate multiple coupon sets. Testing protocols such as those provided by the DCTS are vital in the early evaluation of materials for uses such as high-temperature/high-pressure heat exchangers, turbomachinery, and gasification systems.

Critical minerals (CMs) play a vital role in our modern economy and national security. Critical minerals and their subset, rare-earth elements (REEs), are mineral resources with special properties that have use in high-technology products like smartphones, hybrid electric vehicles, magnets, medical devices, televisions, hard drives, catalysts, and more. The EERC, in partnership with the U.S. Department of Energy’s (DOE’s) CORE-CM Initiative, created the Williston Basin CORE-CM Initiative in 2021 to research future expansion and transformation of coal and coal-based resource utilization within the Williston Basin for the production of REEs, CMs, and value-added carbon-based products.

The EERC has demonstrated a coal- and biomass-to-liquid (CBTL) hydrocarbon fuel technology by creating a supported, iron-based Fischer-Tropsch (FT) catalyst. The catalyst preparation procedure was optimized and then scaled up to produce 2 kg of catalyst to fill a pilot-scale FT reactor system. Synthesis gas was produced from a fluidized-bed gasification system that is capable of processing coal and biomass. Impurities from the raw syngas such as sulfur, tars, and particulate matter were reduced to levels that would not significantly diminish FT catalyst performance. 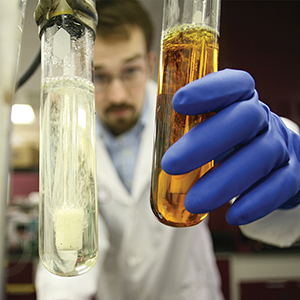 The gasification and FT reactor systems were operated continuously for 5 days on feed stocks consisting of sub-bituminous coal and blends of coal and various biomass sources such as olive pits, switchgrass, and dried distillers' grain. Liquid and wax hydrocarbon products were collected and subsequently upgraded into synthetic isoparaffinic kerosene, which used elements of a proprietary process for converting crop oils into jet fuel. The finished fuel very nearly met specifications for synthetic military-grade isoparaffinic kerosene. 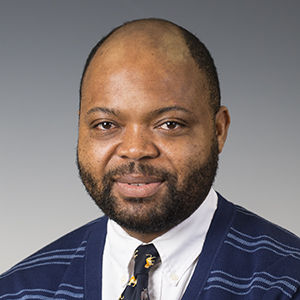 Dr. Alexander Azenkeng
Assistant Director for Critical Materials
P  701.777.5000
research@undeerc.org
We use cookies on this site to enhance your user experience.